I’ve got news for you! Last week we recorded male vocals for the track “Vanilla Skin Delight”. Our special guest is Platinum-Gold-awarded artist Tobias Regner!

His voice just fascinates me, and as soon as we had made the decision that we would want a male singer on “Vanilla Skin Delight”, I thought it would be just perfect having Tobias’ powerful and warm voice completing this composition, i.e. turning it into a real rock song duet. Fortunately, our friend and movie-maker Konrad Hollenstein was able to provide us with the necessary contact information, thus we were able to get hold of Tobias the very next day. 48 hours later Tobias knocked on the door and I was very happy and grateful that he had found his way to Mastersound Studio. We realized straight away that we have so much in common (sports, both being born on the country side, good and bad experience with the music business, touring, red-wine, art…), despite the fact that we come from completely different musical backgrounds: Tobias winning “Deutschland Sucht den Superstar”, the German version of Pop Idol, in 2006, compared to my own revolutionary beginnings with Theatre of Tragedy in the nineties. Here we are, being duet partners in the same song, moreover, it felt like we had known each other for a long time. Tobias is a very open-minded, warm-hearted and fine guy, with whom I really would like sharing stage with sometime in the future. He is a fantastic rock singer, and he is highly professional. I asked him to sing in the way he felt the most comfortable with. “Vanilla Skin Delight” will blow you away!

Here’s an interview with Tobias (see below):

1. Tobias, you just recorded a fantastic duet with Liv Kristine for her upcoming solo album. How did it all happen?

As Liv and her producer, Alex Krull, decided that this song should be a duet with a male singer, they remembered me from a TV-show that I took part in a few years ago. They know my voice and they thought that a warm but powerful way of singing would fit the male part of the song perfectly. I think it was some kind of destiny that a friend of mine, Konrad Hollenstein, had been in contact with Alex that same day, picking up this idea. Konrad called me immediately and Alex sent me the track. I liked it, so a few days later I visited Liv and Alex at Mastersound Studio and we recorded my vocals.

2. How did the recording session turn out at Mastersound Studio? And how was it to meet Liv in person?

I really enjoyed my time in the studio. It is situated at the country side, in very quiet and peaceful surroundings. Because I love the country side, too, I felt really comfortable. Liv opened the door with a smile and from the first moment there was a calm and family-like atmosphere. In Germany we would say she is very “herzlich”, a really warm-hearted person. To be honest, I have to admit that the style of music that she is doing with Leaves’ Eyes is not 100% my favorite one, so I don´t know Liv as good as her fans do. I got to know her as a very open-hearted person who is happy with what she´s doing and loves to sing and compose music. She was so down to earth that I didn’t feel like standing in front of a star. We exchanged experiences concerning our musical past and after a glass of red wine we started recording 😉 I think this must have been one of the most effective days of recording I’ve experienced so far. The atmosphere was so relaxed that there was absolutely no need to get nervous. I just felt very focused and into it. So after a few hours it was done, and Liv was very happy with my work.

3. Can you tell us something about you and your personal musical career? What are your plans for the future with your own projects?

I started my first band when I was thirteen and over the years I got involved with a number of bands. After playing the keyboards in the beginning I soon became the frontman in all these bands. Next, I started playing the guitar and after a few years of gathering live-experience I took part in the German Pop Idol Show in 2006. I got a record deal and the ball started rolling. However, I didn’t perform my own songs and it also seemed as if people liked me more as a person than they liked my music. So what I’ve been doing for the last years is trying to find my own individual style, getting better in writing songs, playing as many gigs as possible and make the people focus more on my music than only on me. I hate it when I look into the audience during one of my concerts, watching people that are obviously not that interested in the music, however, can’t wait to have an autograph from the guy that was on TV. Now I am explicitly concentrating on my music. Right now I am writing songs for my third studio album. My aim is to find and refine the style of German rock music that really satisfies me. My plan for the future is of course to become a big German live act some day;)

4. What is your personal taste of music? Any favorite bands?

Since my sixteenth birthday I’ve been a fanatic Metallica fan. To me James Hetfield used to be the coolest guy on earth. Of course I still like their music very much, however, there are three bands that sound even more genius to me: Stonesour, Billy Talent and my absolute favorite band the Foo Fighters. Composing songs like Dave Grohl … I think I´m not the only one dreaming of a song-writing session with him 😉

5. Will there be a chance for the fans to see Liv and you singing together on stage?

If the fans and Liv want me to come, I´ll be there!

BLOODRED back at MASTERSOUND STUDIO 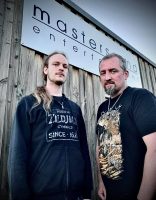 Ron: Great news, we‘ve finished recording all instruments for the new album! The drums were once again recorded at Mastersound …