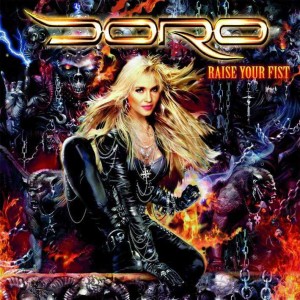 “Raise Your Fist”, the twelfth studio album released last week in the U.S. and Canada by metal’s reigning queen DORO PESCH, has debuted at #65 on the American Billboard Heatseekers chart. Congratulations!!!

Alex Krull: “For me it was a great pleasure and honor to be able to work with Doro on a few songs of her upcoming album. Doro and I had met some time ago in Wacken and talked about working together. At Doro’s brilliant 25 years anniversary concert we were also with Leaves’ Eyes there and then finally, we have forged during last year’s Metal Female Voices Festival in Belgium concrete plans! To me it was very important that the songs that I’ve mixed match the incredible power of Doro’s liveshows. We also experimented with the guitar tone and example in my mix of “Raise Your Fist” worked with octave guitar. As icing on the cake is the cooperation with Gus G on Doro’s “Last Man Standing”. Gus and me have met at the Musikmesse in Frankfurt at the ESP Artist Dinner, and I asked him to so the solo guitar on this song. It made us all very happy that Gus has found the time to hammer a great solo on the song, although he is just really busy with Ozzy Osbourne! It just turned out perfectly.”