This is a brand new interview for the Napalm Records Spring catalog with Alex Krull about the upcoming DVD “Die Gottlosen Jahre” (The Godless Years):

For over 25 years, ATROCITY has been writing German metal history and repeatedly causing furor. You have finally released a DVD retrospective “Die Gottlosen Jahre” (The Godless Years) that showcases ATROCITY’s impressive and eclectic approach over the years. What are your thoughts on this DVD release?

Alex: “It is a very special feeling, knowing that after devoting such a huge part of your life to a band, the hard work is immortalized on film. To be honest, who would have thought that a German underground band would one day tour the world and even enter the charts! Personally I’m very happy that over 80 interviewees are featured in the anthology film “Die Gottlosen Jahre”, the highlight of the DVD. You will recognize many familiar faces from the metal and gothic scene, from Carcass to Lacrimosa, but also others who work behind the scenes, such as journalists, deejays, and music industry insiders. This is one of the reasons the movie is so interesting. Especially, what they have to say about the band and the scene back in the days. The anthology film is over 3 hours long and features rare footage of our musical adventures as a band and much more.”

ATROCITY always tried to shake up the scene and it comes across well in the film, because it is those outside the band that are sharing their memories…

Alex: “I’d like to say a big ‘thank you’ to all the supporters and people involved, as well as the people who filmed everything and made this great documentary possible.”

Although the film is undoubtedly the highlight of the DVD, the special anniversary show at Wacken and the short “Dreath…”, starring you and Ralph Scheepers of Primal Fear, also deserve much praise. What comes to your mind, when you look back?

Alex: “During the year-long work on the movie “Die Gottlosen Jahre”, we had to rummage through our band archive and it was unbelievable how much video material we found. Some of the footage and pictures I didn’t even know existed! So many memories resurfaced! It seemed as if I were reliving the past: from my youth to the present. As artists, I believe we did everything right. And it wasn’t always the easiest road to take, since we were always swimming against the current. But we managed to creatively influence all areas of metal with fresh ideas, and that is something we can be proud of. Even if some people don’t recognize our contributions. Dating back to the beginning of death metal or the gothic metal crossover, we have been active since day one. These are some of the most unforgettable and special memories. And it’s not just me. Many others involved in the project share this opinion. Some of the interviewees were truly touched. It was so honest and authentic. We didn’t put lipstick on the pig. The anecdotes featured are the true-to-life stories of a metal band.”

What does the future hold in store for ATROCITY?

Alex: “It wouldn’t be ATROCITY, if we hadn’t already composed new material (laughs). Seriously, we no longer have to prove ourselves anymore, but my own drive always brings with it new challenges. That’s the way we will go on.”

Are there any concrete plans? A new album perhaps?

Alex: “We are working on a album trilogy entitled “Okkult”. It will be very dark, epic, and furious. Not just the concept, the music will also be like that. Perhaps it may be best compared with our “Blut” or “Atlantis” albums. I don’t want to give away any more details now, except that we hope to release it in 2012. It will be the perfect soundtrack for the coming apocalypse (laughs).”

The “Werk 80” releases were quite successful. Any room for a sequel?

Alex: “At the moment there are no plans, but never say ever. Right now we are busy working on “Okkult” and promoting “Die Gottlosen Jahre” DVD. But you never know… One insane idea is all it will take to point Atrocity in a brand-new and exciting direction (laughs).” 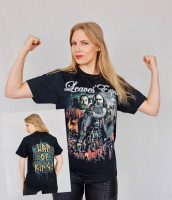