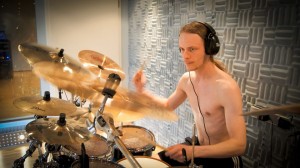 ATROCITY drummer Joris Nijenhuis answered some questions about the production of the upcoming “OKKULT” album.
Here is the first part:
How was it to record the new songs of ATROCITY?

It’s very cool that I could finally play on a new Atrocity album.

I joined the band in december 2011 and the drum recording sessions took place in the summer time for the new “Okkult”-album, so that’s pretty quick.
I’m especially looking forward to play these songs live, so i can perform the songs on stage which I play on the “Okkult”-album myself.