There have been significant changes in the band lately: the former front lady Liv Kristine left LEAVES’ EYES. Unsurprisingly, now there are many rumors concerning the situation. Moreover, Liv’s position is quite different from the official statement on the LEAVES’ EYES website. So, your Russian fans are eager to get firsthand information. When and why did you decide to part ways?

Tosso: The contact with Liv has become very difficult. Since January 2016 Liv’s departure from the band has been in discussion. When Liv and Alex split up personally early January, Liv wanted to leave the band right away. But Alex convinced her to stay with the band and they both made a very good agreement with each other for their private life and business. So the band situation seemed to be solved at that point of time. But since February her new fiancee / therapist tried to interfere in a lot of band matters. He talked very bad about LEAVES’ EYES and that shows, tours and interviews  shouldn’t happen without him anymore. Her fiancee / therapist even told Liv to step aside from the band. In March things went far beyond after Liv moved to her engaged therapist and it became very clear to everybody in the band that we will go separated ways in the future. Liv also wanted to be involved in picking the new singer for LEAVES‘ EYES. We told her that we want to decide ourselves who will be our new singer in the band. So there has nothing been happening behind anybodies back. Beginning of April we had a band meeting to talk about how things go on. In the meeting we decided together to go separate ways immediately. Liv told us she is not able to fulfill her touring commitments with the band anymore for personal reasons. Moreover, Liv’s lawyer wrote in a letter to Alex that a further cooperation including the live shows with the band is not possible for Liv anymore. So Liv was relieved not having to play any future shows with LEAVES‘ EYES. As a result of the meeting, we also set up a press statement together with Liv, to inform the fans and media. To the surprise of everybody this first press statement we set up together was attacked soon after by several additional posts and statements from Liv. Suddenly other people and “trolls” started to spread nasty rumors and lies on the internet. That was the reason for the confusion and anger in April. For myself I can clearly say, if anyone in the band would have treated Liv in the way, some trolls in the internet tell, I wouldn’t be part of this band anymore. Also I can say that Alex is a single father at the moment and since Liv and Alex separated from each other their son lives at his place.

Was it a unilateral or a bilateral decision? Why was it necessary for you to resort to a mediator’s assistance, if not a secret? At least, judging by the protocol posted on your official Facebook page, the decision was mutual.

Tosso: A mediator can help to find a good way of communication, when several people are involved. In our case we had a friend of Liv doing this job very well. Alex and me both know this woman and agreed that this would be a good idea. Actually the results and how we settled things together were good in my opinion. After the band meeting we hugged each other for example. A few days after our common press statement was released, several additional and attacking postings from Liv followed, also from other people who were not involved in the matter at all or being around with Liv and us. This is something I don’t understand until today. These postings caused the confusion and anger that you could find on the internet in the weeks afterwards.

What reaction on Liv Kristine’s leave have you received from your fans and your colleagues within the metal scene?

Tosso: There was a lot of surprise and sadness in the beginning, which is understandable. But anger and „internet fake news and rumors“ followed very soon as said before. I have learned that there are people that organize themselves in „hate groups“. This is something that already started after the NIGHTWISH and ARCH EMEMY splits. As a music fan this was something completely unknown and new for me. But I got also really nice and motivating words from fans and other musicians, who know that the band is not a bunch of idiots and assholes. Obviously LEAVES‘ EYES is not the first band in the world that split up with a band member, and many other bands that we played with and are friends with us, told me about their similar experiences.

It is well-known that Alex was the producer of Liv’s solo project and the songs were recorded at Alex’ Mastersound Studio; moreover, he and Thorsten composed all the music. Are you going to continue collaborating, or will Liv be on her own?

Tosso: That’s true, since 2005 release „Enter my religion“ all of Liv’s solo albums have been produced and written here at Mastersound Studio. Moreover, in January Alex recorded her latest guest vocal appearances such as TANZWUT “Stille Wasser”and EDEN’S CURSE. When we had the band meeting about the split in April, we offered Liv to help with her new Solo Demos, too. She didn’t react on our offer. Here at Mastersound Studios we are busy with new stuff from ATROCITY and LEAVES‘ EYES, as well as other band productions.

You already have a new vocalist – Elina Siirala, a Finnish singer living in London. How and when did you decide to invite her to become the new front woman of LEAVES’ EYES? Did you consider any other female singers and why did you choose Elina?

Tosso: Elina’s band has supported Leaves‘ Eyes in 2015 several times in the UK. We already noticed her powerful voice and performance back then. When it became clear that Liv will not do anymore live shows with us, we contacted Elina. All in all she only had a very short time to learn a set that we played in front of more than 20.000 people in Indonesia /Jakarta. Pretty awesome start, and Elina did very well!

Needless to say, Elina has a unique and beautiful voice. Did she receive any degree in music?

Tosso: Yes, Elina has made a degree in classical singing in Finland and a trinity diploma (guildhall) in contemporary styles in London. So she is a studied and trained classical singer. Elina has music in her veins as her family is composed of passionate and professional classical musicians, too. Her father is a concert piano player, her mother a violinist and her brother, who lives in Munich, is also a concert piano player. Besides that, she has a rather well known cousin in the world of metal, Tuomas Holopainen from NIGHTWISH. Hail Suomi!

Did the fans appreciate Elina’s performance at your live shows?

Tosso: With Elina we played shows in Indonesia, Germany, Netherlands, Belgium, Denmark and Switzerland. We also played some big summer festivals here in Germany. The reactions have been overwhelming and fantastic. Elina has both, awesome stage presence and a powerful voice, which fits very well to the symphonic and heavy music  of LEAVES‘ EYES.

How do you get along as a team with Elina? Was Elina’s coming a breath of fresh air for the band?

Tosso: Elina is a very nice and humble person. The atmosphere in the band is very good and people can feel this during our live shows. Elina is very professional in all aspects of music and she has a good sense of humor. We all like Elina very much, also our crew, the fans and promoters at the shows who met Elina for the first time! Her voice offers new possibilities for the band in the future as well.

Who will be responsible for the lyrics now that Liv is not a band member anymore?

Tosso: Already in the past, Alex was a driving force regarding album concepts and lyrics, too. So basically it will not be that much change in the bands workflow as it might seem from the outside.

Is the style and sound of LEAVES’ EYES music going to change with Elina’s coming the way it happened with XANDRIA or TRISTANIA? Are you going to continue using your Viking concept in lyrics and live performances?

Tosso: There will not be a big change in the sound of the band. Alex and me have always been the main composing and writing team. So all the new songs will have the same people behind them, as it was in the past of LEAVES’ EYES. My job is mostly the writing and melodic/harmonic part of the writing process. Alex is fantastic with drums, vocals, arrangements and all aspects of the recording process. Alex also created most of the melody vocal lines on „King of Kings“. Yes, we will continue using viking concepts on our albums and also live shows. Some people wrote on the internet, that „without Liv the band is not allowed to use viking concepts.“ That’s nonsense anyway. We have never made a big deal out of it, but Alex’ father and family are coming from the area of the legendary “Jomsvikings” and my mother and mothers family are coming from the area of “Haithabu (Heiðabýr)” the old viking trade capital. Besides that, Alex has become a pretty awesome sword fighter. Moreover, we have many other lyrical topics in LEAVES’ EYES, too. Just check out the “Symphonies of the Night” record.

What are your plans for the future? You are going to release the new version of “Edge of Steel” and a video with Elina, aren’t you?

Tosso: The “Edge of Steel” video and online single have just been released. As mentioned before new LEAVES’ EYES releases will follow this October. We will play in Belarus for the first time in August. In September we will play on the Full Metal Cruise. In October we will return to the Metal Female Voices Festival in Belgium with a big headliner production, including our stage viking ship. In November and December we will tour North America for seven weeks together with SONATA ARCTICA.

When can your Russian fans expect to see the renewed LEAVES’ EYES team in Russia? It’s been quite a long time since your last visit in 2013.

Tosso: Yeah, last time in December 2013 we celebrated my birthday on stage in Moscow! Awesome memories!! We have good news for our Russian fans: LEAVES’ EYES will return to Russia and play two shows in St. Petersburg and Moscow on the 26th and 27th of January 2017!

Thank you in advance and good luck! 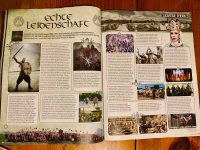